i changed my stars

Looking in the mirror one day when I was a teenager I cringed, "I can't believe I'm that girl."  There I stood, 215 lbs and counting.

When I was in sixth grade I weighed about 120 lbs and my dad told me, "If you just maintain that weight, that would be perfectly healthy."  That was the last time I remembered looking at a scale and seeing any number in the 120's.

I don't recall when I started gaining weight.  Puberty probably had something to do with it, but there I was in high school over 200 lbs.  I was "that girl."

Throughout my teens and early twenties I tried everything.  I walked in the mornings with my dad.  I did Atkins diet.  I even did this absurd "diet" where I just wouldn't eat anything until I lost 5 lbs in the week and then I'd just maintain that (That ended abruptly when a friend of my sister's found out and swiftly and painfully punched me in the arm and told me that if she found out I was keeping that up she would be SO mad at me.  I didn't realize at the time that that was pretty much anorexia).  Nothing worked and nothing lasted.

Then one day, when I was 23 I was in the shower and I realized my life was never going to change.  With the way I was, my life was as good as it was going to get, and I just wept.

One day at my parent's, my mom was reading an article on Gastric Band surgery.  She had me read the article and told me, "If this is something you are interest in, we will help you pay for it!"

I researched it for a year before deciding to do it.  I knew everything there was to know.  I also knew it was possible to cheat it and that terrified me.

The night before my surgery I was so scared that this would be just one more thing that I failed at, but this time it was going to cost my parents and me a LOT of money.

My goal for the surgery wasn't to get skinny.  In fact I didn't expect that I would.  My goal was to get skinnier and better yet, healthier.  My goal weight was 173 lbs.  That was the lowest weight I had gotten to when I did Atkins in 2003 (I had gotten back up to 225 prior to the surgery in 2007).  My research showed that the average person would lose up to 50% of their excess body weight.  I had 80 lbs. of excess body weight, so losing over 50 lbs. was exceeding that average.

I asked one of the nurses if it was possible to lose all of my excess body weight, she told me it was.  I had a new goal.

The thing with this surgery is, the band is a tool.  If used properly you can be successful, but as previously mentioned it can be cheated.  It is a forced portion control, but you decide what those portions are, and some items won't be affected by the band at all.  Liquid calories and such.

The difference this time?  I wasn't expecting or hoping for a quick fix.  I was ready to make a life change.  Prior to surgery I ate crap all the time and I lived a sedentary life.  Now I am very cautious of what I eat.  My habits have changed.  I learned how to eat and found foods that I like that are actually good for me.  Nutrition is THE BIGGEST  part of losing weight.  If you don't understand that, you can't make lasting changes.

There is no such thing as a diet.  You have to be ready to make changes for the rest of your life or I guarantee it won't last.  No matter how much weight you lose on a crash diet, if you don't keep it up forever or make the necessary permanent changes, it can't last.

I sometimes struggle with the thought that I didn't do it on my own.  I struggle knowing that I needed to have surgery to get to this point.  But  the fact of the matter is, I did.  I needed something to be the catalyst to my weight loss.  I needed a jump start.  But once I got it, I literally hit the ground running and never looked back.  I know that I never would have gotten to where I'm at without that jump start, but I also did the work to come as far as I have.  The surgery could only take me so far.

My life is completely different than it was when I was that girl crying in the shower.  Since I had surgery I have been bunging jumping, sky diving, scuba diving, water skiing, rock climbing, wake boarding, snow boarding, parasailing and zip-lining.  I've done 5k's, 10k's, half marathons and triathlons.  I went from a size 18 to a size 4.  My life has so much more potential now.  I don't think I will ever stop being amazed that I did it.  Sometimes I can't believe that I was ever that girl, but even more I can't believe that I'm not anymore.  I feel so grateful to have seen both ends of the spectrum, but I also take credit for the work I had to do to get to where I am.

To quote a Knight's Tale, "I changed my stars." 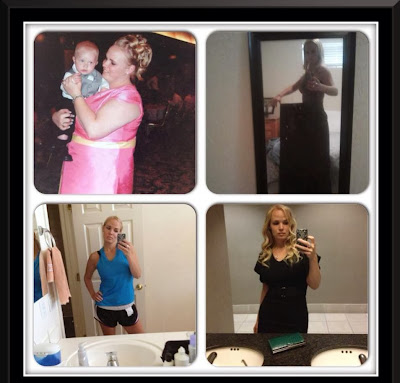 About Julia:
I am a recovering food-a-holic.  I am a singer, wannabe athlete, wannabe outdoor enthusiast (I'm working on the wannabe's), romantic and believer in miracles. The girl I am today is constantly trying to outdo myself.  I'm always reaching for the next goal and challenge.  This hasn't always been the case.  I used to be confined to a body that was capable of so little.  Since losing weight I can't seem to test my body enough.

My main goal and ambition is to be a motivation to those who are trying to lose weight and who don't believe it's possible anymore.  I am proof that it is!  One thing that helps me the most in my change is seeing others who have been down a similar path.  I want to now be that person for others.  My message is one that I got from the movie "A Knight's Tale."  It is possible to change your stars.

NOTE: If you would like to enjoy more of Julia's stories, life experiences and sense of humor, here is a link to her blog.
Posted by Unknown at 7:20 AM